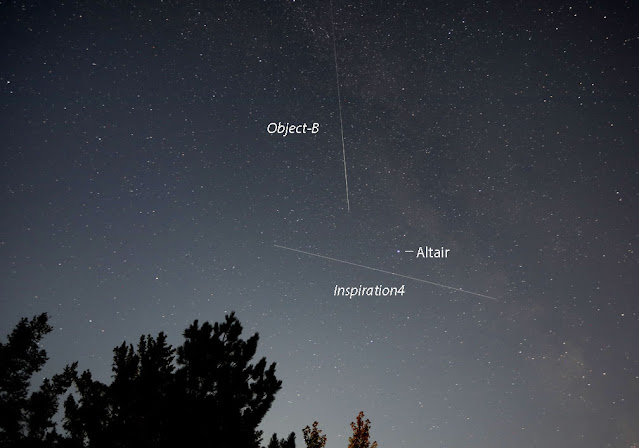 The Inspiration4 ship and crew pass beneath the bright star Altair around 8:42 p.m. Friday night, September 17. At the same time, Object-B, a rocket stage from an earlier Japanese satellite launch, crosses the same part of the sky.  Bob King Sometimes satellites and spacecraft don't show up at their predicted times. One of the main reasons this happens is when mission control decides to raise or lower the object's orbit by firing the ship's thrusters.  Last night, unbeknownst to most, SpaceX lowered the orbit of historic Inspiration4 space capsule sometime before or during its pass over the U.S. When a spacecraft's altitude is lowered, it appears lower in the sky and moves more quickly. A faster speed also means it will arrive in view earlier than the original time. The higher the orbit the more slowly the satellite travels, the same way Earth takes more time to circle the sun compared to Mercury.  I set up the camera a little more than 10 minutes in advance just to tes
10 comments
Read more 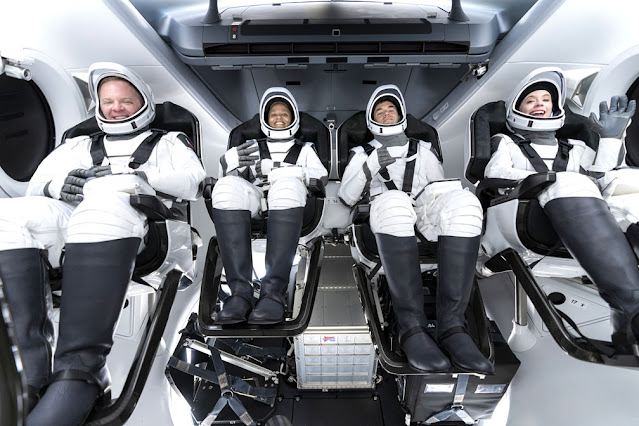 The SpaceX Inspiration4 crew during a launch day rehearsal, From left:  Chris Sembroski, Dr. Sian Proctor, Jared Isaacman, and Hayley Arceneaux. Space X, CC0 By now you will have heard of the Inspiration4 orbiting spacecraft that's ferrying a crew of four civilians around the planet every 96 minutes. Although they all trained for six months for the flight, the ship is run by computer. The primary goal of the mission is to raise money for St. Jude's Children's Research Hospital. Wednesday night's launch went flawlessly, with the spacecraft currently orbiting the Earth at an altitude of about 360 miles (580 km) and inclination of 51.6°. That steep tilt, identical to the space station's inclination, means that the craft is widely visible from many locations on the ground. The only down side is that it splashes down in the Atlantic Ocean off the coast of Florida sometime on Saturday or Sunday, September 18-19. That leaves just one or two nights to see it. I had hoped t
2 comments
Read more 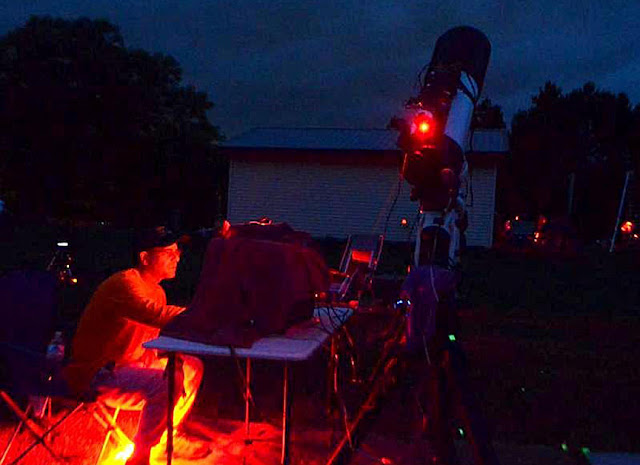 A participant at Northern Nights Star Fest uses a filtered computer to monitor the progress of a photo taken through his telescope. Red filters preserve night vision. No white lights are allowed on the observing field during the event. Ben Huset   Last weekend I attended the 10th annual Northern Nights Star Fest  (NNSF) held by the Minnesota Astronomical Society (MAS). Members flee light-polluted backyards and head north to Long Lake Conservation Center in north-central Minnesota to revel in dark skies. I spoke at the event and had the time of my life. We've all been a little starved of company the past year and a half because of COVID-19 fears. Getting together with other amateur astronomers for face-to-face conversation and to share the night sky was balm for all. I'm grateful the MAS provided the opportunity. MAS member Jerry Jones speaks Friday night about the work of Edward Pickering and the women at Harvard College Observatory to elucidate the properties of stars through
14 comments
Read more

A bright green arc and bundles of rayed curtains light up the northern sky during an auroral display on March 19-20, 2021. Bob King As soon as it gets dark, observers across the northern U.S., Canada and possibly the Midwest should keep watch for the aurora. Since this morning (August 27) the Earth's magnetic envelop has been buffeted by strong solar winds from a coronal mass ejection (CME) that occurred on August 23. Activity's still ongoing as of 7 p.m. CDT. Spaceweather forecasters are predicting a G1 or minor storm through about 10-11 p.m. I've got clouds and rain here all night, but hopefully conditions are better where you live. With moonrise around 10:30 p.m. this evening we'll have a nice window of darkness. Find a location with a dark sky and look above the northern horizon for a greenish-colored arc of light reaching from northeast to northwest. You may even see vertical rays extending upward from this arc higher in the sky.  Let us know if you spot anything.
Post a Comment
Read more

Groovin' with the Moon and Zubenelgenubi 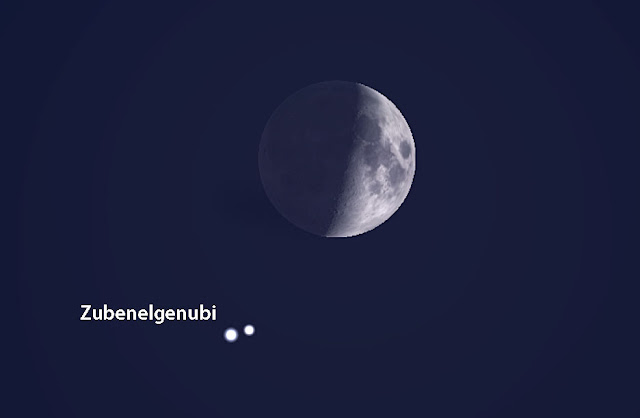 The half-moon will shine just above the bright double star Zubenelgenubi in Libra tonight (August 14), making for a stellar sight in binoculars.  Stellarium It's fortunate that stars have such cool names: Nunki, Aldebaran, Rigil Kentaurus, Betelgeuse just to name a few. One of the most fun to say out loud is Zubenelgenubi (zoo-BEN-el-je-NEW-bee), which also goes by the more prosaic moniker Alpha Librae. It forms part of the outline of the diamond-shaped Libra the Scales, a zodiac constellation which represents weighing scales.  In this 16th century globe created by Gerard Mercator Libra is shown both as a balance and the scorpion's claws. Public domain In ancient times, the Babylonians and Greeks alternatively pictured Libra as the Claws of the Scorpion, and included it as part of the neighboring constellation Scorpius. Its brightest stars still bear Arabic names that refer to the arachnid's pincer-like claws. Zubenelgenubi means "northern claw"; Zubeneschamali (z
2 comments
Read more

A Taste of Celestial Winter in July 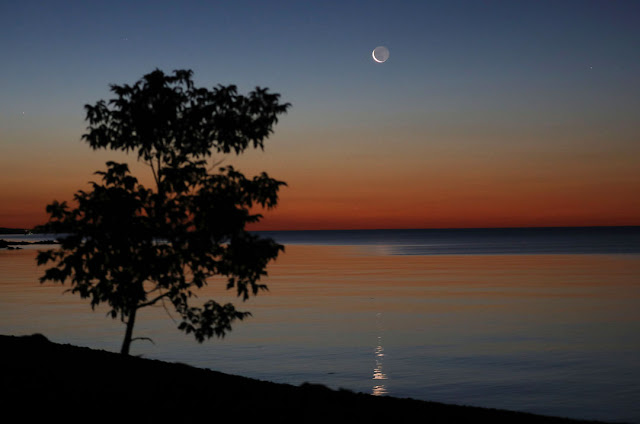 The dawn lunar crescent displays bright earthshine as it rises over Lake Superior near Duluth in July 2019. Earthshine is sunlight reflected from the Earth to the moon and then back to our eyes. Watch for a similar scene on Tuesday morning, July 6.  Bob King It may be different where you live, but someone turned up the heat this month. The air feels like hot breath, but sweeter, filled with delicious scents of green plants, pine sap and flowers. You know it's summer when the Summer Triangle unfurls across the southeastern sky at nightfall, and Scorpius drags his tail along the horizon.  This is the view facing east-northeast about 90 minutes before sunrise on Tuesday, July 6. The moon and Pleiades should be well visible without optical aid. The Hyades cluster may require binoculars for a good view because it's lower in the sky. Stellarium Most of us seek shade during the day. After the stress of sunlight departs at dusk, we slow our pace and open our senses to new sights and sm
2 comments
Read more 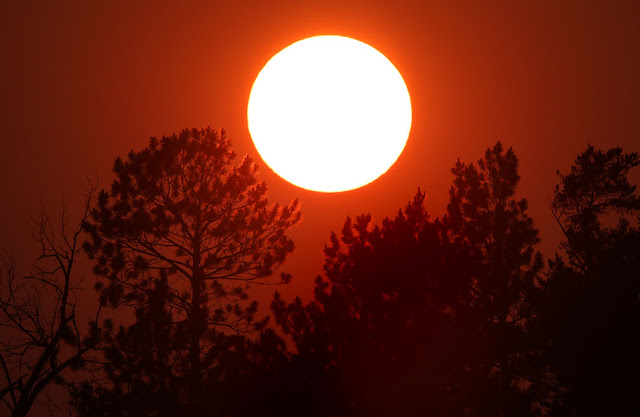 The sun and sky were "on fire" last night, July 2, colored by forest fire smoke. Bob King The past few days and nights you may have noticed how much less blue the sky appears even with the sun shining. Today (July3) in northern Minnesota, the meteorologists will tell you it's clear and sunny, but the sky is actually gray. As for the sun, even 3 hours past sunrise it's still tinged pale orange. This satellite view on June 30, 2021 shows a plume of smoke moving south out of Canada into Minnesota. Currently, the Midwest and far West are under smoky skies. NOAA These are symptoms of smoke from wildfires across the western and southwestern U.S. as well as Canada. Today, July 3, smoke plumes loom over the Midwest and far West. Most of the smoke lies at high elevations so you can't smell it. But occasionally, winds bring it closer to the ground, and the air smells like a campfire. Too much of it can pose a health hazard. Sunspot region 2835 shows through the haze just
Post a Comment
Read more
More posts